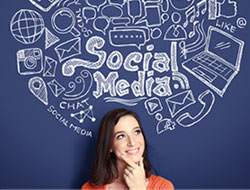 How to Win at Social Media as a Medium Sized Business

In the age of dynamic pricing and individual customer incentives, one theme remains constant: businesses that don’t engage in social media are likely to suffer. In this day in age, you’re expected to have a Facebook page (at the very least) to avoid the millennials’ ridicule. Five years ago, you were cutting-edge if you were posting videos on YouTube, creating multiple Twitter accounts, or promoted your business via Facebook. Nowadays, social media is seconds away from becoming its own accredited business major. One could even say it’s vital to business continuity. What made social media this remarkable marketing powerhouse? How can a business use social media to become a significant player amongst their immediate, competitive peers?

Competing with Big Social: Is it pointless?

There are companies that have everything that you don’t—the budget—the staff – the time. This is big social. Unlike big social, small to medium-sized businesses (SMB’s) have sincerity, and social media is the vehicle to deliver that sincere, “customer first” approach. Convey that sincerity to your customers, and you will likely see a positive reception of your brand.

On top of that, smaller businesses can switch up their marketing strategy when they make a mistake, or even if they want to change direction. Being smaller makes them agile, and shifting strategy would take a large corporation months to execute. Also, being in the small to medium-sized category lets your business take advantage of the “shop local” mentality. Remind your customers that you don’t have a large wallet like the big players do, so they need to shop locally. Position yourself like a small coffee shop would Starbucks; like David and Goliath. Show them on social media just where every cup of coffee purchased goes – local animal shelters, community baseball teams –the list goes on. Lastly, be yourself on social media. Let your hair down and post (1 in 50 posts) something that you personally think is cool but has nothing to do with your line of work. Post a picture of a piece of art that you find interesting. When you’re being yourself on social media, your customers can sense some authenticity – something large corporations can’t fake…easily.

Being a small to medium sized business creates 3 expectations in your customers’ mind.

Addressing Trolls as an SMB

There will always be one. When your account starts to gain momentum and the attention starts rolling in, you will always have at least one troll. This is not to be confused with dissatisfied customers or bad reviews; no, those should be handled with care and urgency to try to save your reputation. As a rule, you should NEVER take down a critical review just because it didn’t say anything good about your business. Being caught filtering information is perceived as terrible social media behavior. A troll is someone who has come to your page to post slanderous, detrimental comments in the hopes to tank your sales, or even just to get a rise out of you. They could be a competitor’s fake account, or even just somebody who wants to pick on a business to brighten their day.

As a business, you want to be proactive in managing your social media reputation and addressing trolls. The first action you want to take against a troll is deleting their comment or message, then blocking them. Your customers understand removing a comment or blocking a user who is harassing your business. Your customers are rational. If you can’t at least flag a comment for the moderator to review, then it might just be best to let it go and don’t respond. Be better than them. Your third option is to post one and only one response (any more will make you seem petty and on their level) and you better make sure that your response is bulletproof logic-wise, grammar-wise, and politically correct. If you lose your cool, misspell everything, or use all caps, etc., then you have fallen into the troll’s trap to make an online fool of you. In addition, and as a rule, never go back and forth with a customer through social media. Some issues are better resolved offline where emotions can be better managed.

Even though time spent on social media seems to be on the (slight) decline since 2010, there’s no denying that there are still pages to be liked and money to be made. Right now, the clear winner for advertising platforms is Facebook. Its simple, low-cost, and easy to use ad platform allows just about anyone with $5 and 10 minutes to create an advertisement. The attractive selling point for small-to-medium sized businesses is that Facebook categorizes users’ interests as well as their demographics. It should be noted however that Facebook advertising seems to favor B2C business vs. B2B. The way that Facebook pages are set up for businesses is hierarchical in nature. Information trickles down from a business’s wall into a customer’s feed. LinkedIn would be more for the B2B marketer where you are able to learn about people’s influence and buying power in their organization.

To conclude, small to medium sized businesses, or SMB’s, do have a chance of competing against the social media marketing budgets of large corporations. They compete with big social by communicating their sincerity, authenticity, and leveraging their perceived position. Understand your customers’ expectations of how your business should be interacting with these digital platforms. Treat dissatisfied customers with respect and dignity, but learn how to identify trolls and weed them out. Don’t get lost in social advertising; try to get as much organic value out of social media as you can while resorting to paid traffic as a boost.